The Beginner’s Guide to Revenge has made the Notables list for the 2013 Children’s Book Council of Australia Awards. Cue: much whooping and woo-hooing (and possibly a little dance of joy in the privacy of my study).

Since a notable book requires a notable dress in which to celebrate, I hunted through my wooden chest and happened across this fabulicious 1980’s taffeta number.

Thanks go to the CBCA and the judges for all their hard work. Congratulations to all the other notablees and short-listees!

My book is about revenge and revenge is certainly in the ether. Just look at the popularity of the TV program of the same name. But is revenge ever a just thing? Is forgiving someone just letting them off the hook or is it the courageous option?

The Beginner’s Guide to Revenge follows the adventures of two thirteen years old, Sebastian and Romola, as they tread this ethical minefield. To read an excerpt, click here. 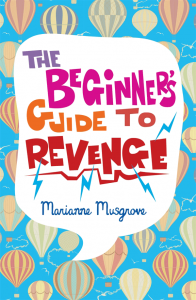 Where does revenge come from?

A guy called Lawrence Kohlberg studied the moral development of humans. He speculated that in a child’s early years, their actions are motivated by avoiding punishment and self-interest. Later, they reason that ‘It’s wrong to hurt someone unless they hurt you first, in which case, it’s open slather’.

The final stage is where a person is guided by higher ethical considerations. For example, ‘I shouldn’t hit that person because it would be bad for society if people went around hitting each other’. From my observation, not a lot of adults reach this final stage!

And the flip-side of revenge – forgiveness

For more ethical quandaries, check out the teachers’ notes.

Image courtesy of piyato at FreeDigitalPhotos.net

Everyone is familiar with the saying “Revenge is sweet”. Not many are aware of that that the full quotation, by 2nd century satirist and poet, Juvenal, actually goes like this:

‘Revenge is sweet, sweeter than life itself – so say fools.’

Thanks for stopping by 🙂